Network Rail is on track to open a new regional distribution centre at a multi-million pound business park in the South West.

Jonathan Robinson, Barberry development director, said: “We are very pleased to announce the arrival of Network Rail at More+ Central Park. It is the ideal location for its new regional distribution centre and will provide an investment and employment boost for the area.

“More+ Central Park is a best in class, strategically located site next to the new motorway junction of the M49 due to be completed shortly, in Q2 2020. Our scheme offers new, self-contained detached mid-box warehouse units with large yards to a market where there is strong demand for this size units. By securing Network Rail, we have demonstrated this is a development of the highest quality in a prominent motorway location in the South West.

“Being able to offer occupiers a prominent motorway connected site in this region has proved to be a real success.”

He added: “Our speculative development was the right strategy for this site. Pilkington Automotive Glass agreed a 10-year lease on a unit last year and, with strong demand from several major companies, we expect to be able to announce further occupiers in the very near future.”

The More+ development provides the final phase of the highly successful 350-acre park. In total, it will comprise 11 buildings ranging in size from 13,200 sq ft to 126,000 sq ft. Units are suitable for business uses including e-fulfilment, storage and distribution. A joint venture between West Midlands-based commercial property developers Barberry Group and Richardson, it will create around 700 jobs.

Mark Watkins, on behalf of Richardson, said: “This has been a very successful development and we are delighted to secure Network Rail, another household name, to join Pilkington at the site. This clearly demonstrates that the quality of the warehouse units and the excellent location is delivering exactly what the market requires.”

Highways England is creating a new junction at the nearby M49, providing direct access into Central Park, which is due to complete this year providing a national motorway connected site. Central Park is one of the region’s largest logistics hubs, which borders the M49 in Avonmouth. It is a fully serviced site with planning consent ready for development. Richardson Barberry is speaking to several interested parties who have expressed an interest in leasing or purchasing a unit. Major occupiers include The Range, DHL, Amazon, Lidl, Farmfoods, Davies Turner and CHEP. For more details on More+ Central Park, visit www.morecentralpark.com. 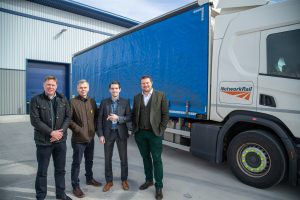 Network Rail has announced a new regional distribution centre at More+ Central Park in Bristol. Pictured at the warehouse unit are (from left) Mark Watkins of Richardson, Will Nell of Bruton Knowles, Dan Cartwright of Network Rail, and Jonathan Robinson of Barberry.

The UK’s leading roofing merchant has moved into its £4million new distribution hub in the South West after the development at a multi-million pound business park reached practical completion.   Joint venture developer Richardson Barberry agreed a deal with SIG Roofing – which plays a critical role in the construction supply chain – for a […]

The UK’s leading roofing merchant is investing £4million in a new distribution hub after agreeing a deal for a unit at a multi-million pound business park in the South West. Joint venture developer Richardson Barberry announced today that SIG Roofing – which plays a critical role in the construction supply chain – has signed a […]

A planning application for a roadside offering adjacent to the new M49 Junction 1 has been approved. The decision on 24th March gives the green light for a petrol filling station/convenience store, coffee shop and two drive-thrus.  This is in addition to the already approved Travelodge (81 bed).